When people think of China and clothing, the qipao or cheongsam, is almost always the first thing that comes to mind.  It is the quintessential Chinese garment.  Last week, on our facebook page, I posted an article from the N.Y. Times about an exhibit celebrating the qipao. As the article noted, this is a very rare occurrence.  Usually, fashion history exhibits follow the trajectory of Western fashions and top designers like the works of Coco Chanel.  The exhibit called The Evergreen Classic: Transformation of the Qipao, is at the Hong Kong Museum of History and since I live in Hong Kong, there was no way I was going to miss this exhibit, so I went to see it last Saturday and I’m back with photos. 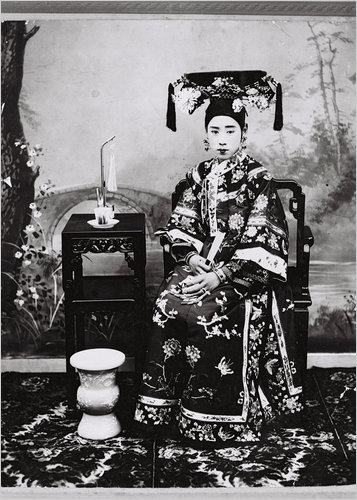 Excerpts from Eileen Chang’s book Chinese Life and Fashions (1943) introduced a few sections which added some interesting context to the exhibit.  This book is now on my reading list.  The exhibit started with gowns worn by the Manchu women during the late Qing Dynasty (late 19th C.) and the Chinese Republic Period (early 20th C.).  I didn’t get many photos of those gowns, because I just couldn’t capture the amazing detail and artistry that went into creating them.  The Manchu women looked so weighed down by these huge multi-layered garments standing on their tiny bound feet.  That all changed after the Empress Dowager Cixi outlawed foot binding.

An interesting little factoid I learned from the exhibit is that after the practice was outlawed, bound feet became unfashionable and women began to hide them behind flower pots for photographs.

I noticed that the neck line of the dresses on show seemed impossibly small.  The trumpet sleeve seen in the photo above was a popular element of women’s garments.  According to the exhibit, they echoed the sleeves seen on men’s garments.  Another popular element was the high collar and the sweeping diagonal line sweeping to the right side of the body.  Some of these elements are part of the essence of the qipao while others changed over time.  For example, at one point in time, the high collar became popular as can be seen in the photos taken by American Sociologist Sidney Gamble during his visits to China from 1908 to 1932.  This type of collar was viewed as slimming since it gave the impression of a thinner, longer face.  The high collar was a popular trend in men’s clothing as well.

During the Republican Era (1912-1949), the Emperor and their staff were permitted to remain in the forbidden city and as the clothing surrounding them was changing, women of the court were not permitted to adopt new fashions.  Outside the court, women began to wear “civilized attire” with Chinese flourishes.  For example, the exhibit showed pictures of Dr. Sun Yat Sen’s very fashionable daughters wearing wide pants and high heels paired with Chinese style tops.

That’s not to say that the qipao disappeared.  It was just updated as the trumpet sleeves became more popular, the length became shorter, the silhouette was still loose and airy and the layers were removed.  Women began to bare their ankles and their elbows which was unthinkable a short time before.

The 1920s marked a liberal era in China and in the 1930s, Shanghai’s fashionable women began to wear long, slender, figure hugging versions of the qipao with high heels.  It also became popular to have a long row of buttons down one side of the dress.

1930s: long, slender, side slits, side clasps and buttons

The diagonal line is still there and so is the high neck.

In the winter, qipaos were
thicker and sometimes lined with fur.  I especially loved all the clasps and buttons used by tailors.  Eventually, zippers took over the functions of buttons but these amazing works of art are still used today to embellish the beautiful dresses.

Chinese women continued to combine the qipao with Western fashion elements.  Through the 40s and 50s, hemlines moved up and the cut became even more figure hugging.  In Hong Kong, women began wearing suits to work that were essentially a qipao worn with Western style jacket.  In the 1960s, the dresses took on even tighter frames to highlight women’s curves.  The waist was taken in a lot and some of the dresses had unbelievably tiny waists.

Later, we started getting into categories of questionable taste in the 70s, 80s, and early 90s with Western elements that should not have been anywhere near the qipao.  Shoulder pads and puffed sleeves on a qipao is just wrong.  There really is no other way to describe what I saw:

When we got into the later part of the 90s and the 21st century, we started to see some traditional designs and some reinterpretations.  In some instances, there were throwbacks to the original Manchu gown in terms of detail and silhouette, while in other instances there were some new interpretations with just a hint of the qipao.

There were also some post-modern and de-constructed interpretations of the qipao. These just hinted at their ancestry with certain elements: sweeping diagonal lines and high mandarin collars.  These elements have endured throughout the century of changes that the qipao has encountered.

My favorite part of the whole exhibit were the kitsch finds that were all over like the movies playing in the background, the postcards included in matchboxes, the posters advertising random products and record sleeves of Chinese girl groups.

3 thoughts on “The Evergreen Classic: Transformation of the Qipao”