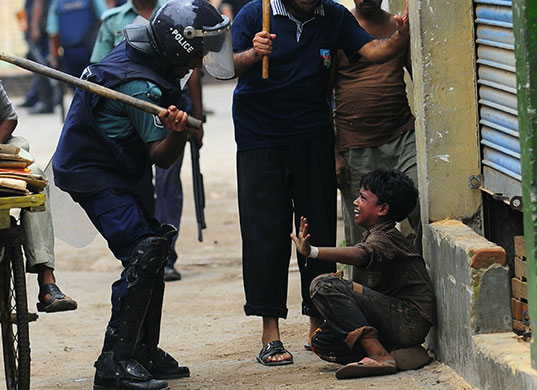 A Bangladeshi policeman hits a child with a baton during clashes with a garment workers in Dhaka. Image via The Guardian, Munir Uz Zaman/AFP/Getty Images.

Last week, Mary wrote about the large scale garment worker protests in Bangladesh. If you don’t know about this issue, I urge you to read more on Mary’s post as well as other sources such as The Guardian, Reuters, and The Daily Star. To view a powerful photo gallery click here.

In February 2010, the Bangladesh Garments Workers Unity Council, a federation of Bangladeshi garment worker organizations, submitted a list of 5 demands to the Bangladesh Knitwear Manufacturers and Exporters Association (BKMEA).  These demands are:

At the moment, workers are near the end of a “month-long peaceful agitation programme to press home their five-point demand”.  SA will continue the coverage on this situation including in-depth posts on the worker demands. Social Alterations has put together a visual message to the workers and others involved.  Bangladeshi garment workers need our support to increase their hourly wage. By uploading your photo and message, you are not only allowing these workers to see your face, but you are also empowering them with the simple statement that you can see them, and that they are not alone.

Upload your photo to flickr and tag the image “SABangladeshProject”: once you have done this, your photo will be added to the pool of public images under this same tag: http://www.flickr.com/photos/tags/sabangladeshproject/. Please be sure to tag the image #SABangladeshProject, or we won’t be able to find you! If flickr is not for you, you can upload to the SA facebook fan page, or thorugh twitter (@SA_FashionLab). You can also email us your photo and we will upload it for you.

Don’t forget to tell us where you are sending your photo from!

Not sure what to write on your sign? Here are a few suggestions to get you started: A fan from Kaohsiung, Taiwan with their message.